Not too long before the holiday season last year, Steve Friedman, 63, found out the pain he was feeling from a poorly fitting denture was more than just that.

A visit with oral and maxillofacial surgeon Joseph Fantuzzo, D.D.S., M.D., led him to the Wilmot Cancer Institute, where he would soon spend the holidays being treated for oral cancer at the Head & Neck Comprehensive Care Center. 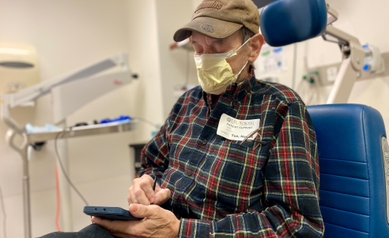 Steve Friedman, of Pavilion, N.Y., visits Wilmot Cancer Institute for a follow-up appointment at the Head & Neck Comprehensive Care Center on Nov. 16, 2021. After losing his voice box to a battle with oral cancer, he uses a stylus and mobile notepad app on his Windows phone to communicate.

“At that point I was far enough along that there was little that my dentist could do for me,” Steve recalls.

Head and neck surgeons Weitao Wang, M.D., and Joel Fontanarosa, M.D., Ph.D., saw Steve a few days before Thanksgiving last year, and found that he had a bleeding mass on his tongue and lumps in his neck. A biopsy showed stage 4 squamous cell carcinoma.

Two days before Christmas, Steve underwent a nearly 20-hour resection and reconstructive surgery that involved using bone from his shoulder blade to reconstruct his jaw. He spent another five weeks recovering in the hospital, taking nutrition through a feeding tube and slowly building up his strength with the inpatient physical therapy team.

With COVID-19 visitor restrictions still in place, Steve’s care team ensured that he was never lonely while he spent the winter holidays at URMC recovering from a laryngectomy and glossectomy.

“Due to COVID, I wasn’t allowed visitors even from family,” Steve says. “As such, these great people made me feel as if I was part of their family, from the nurses to the techs to the housekeepers.”

Despite the lack of outside visitors during the pandemic, Steve says his wife Cindy and their daughters have been his greatest source of motivation and encouragement.

“I’m as tough as old boot leather,” Steve says. “But without my support system, I could not have gotten through my ordeal.”

Though she wasn’t able to visit Steve in person after the operation, Cindy says she stayed in close contact with the team of nurses on the fourth floor who helped Steve through his recovery. 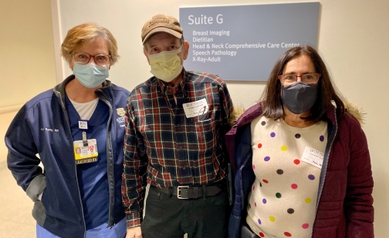 Nurse navigator Carolyn Ruffing, pictured with Steve and Cindy Friedman on Nov. 16, 2021, was a key member of Steve’s care team during his time being treated for mouth cancer at Wilmot.

“The nurses on that floor were wonderful,” Cindy recalls. “I called twice a day checking on him, and the nurses always took the time to speak with me. I was so appreciative of them, I brought in a tray of cookies to say thank you.”

Later in February after leaving the hospital, Steve started six weeks of chemoradiation therapy with Deepinder Singh, M.D., and Megan Baumgart, M.D. Steve participated in a clinical trial looking at how well radiation therapy works in combination with cisplatin, a chemotherapy medication that can be used to treat head and neck cancers. The treatment can lead to some chronic side effects and requires him to see Baumgart for annual surveillance appointments.

Steve’s surgery and treatments saved his life, but left him without his tongue and larynx. As he faces new challenges, particularly in communicating and eating, he continues to see his care team for follow-up appointments at Wilmot.

“I guess the most difficult challenges to deal with are my lack of taste buds, my inability to eat solid foods and my lack of much of a sense of smell,” Steve says.

Having lost his ability to speak, Steve communicates mostly by writing, jotting down notes with a stylus on his smartphone.

“Communication can be a bit problematic,” Steve explains. “I can write responses fairly well, but at times, the conversation has moved on before I can write out my response.” 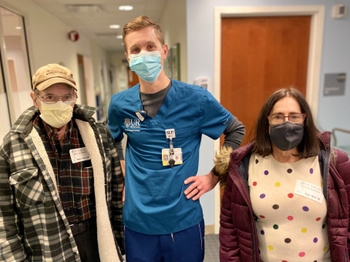 As he continues to recover from cancer, Steve Friedman, left, visits speech-language pathologist Pete Sullivan, center, to work on his ability to swallow. Steve no longer has a tongue or voice box, and can only consume liquids.

Treating a head and neck cancer case like Steve’s requires a team from multiple corners of the Medical Center. He meets regularly with providers from his care team, including occupational therapist Nancy Dukelow, MS, OTR/L, and speech-language pathologists Pete Sullivan, M.A., CCC-SLP and Lisa Valasek, M.S., CCC-SLP, who are helping him optimize his ability to swallow and take liquids by mouth.

It’s a busy schedule that requires frequent trips from the Friedmans’ home in Pavilion, N.Y., but Steve says he’s grateful for the team that is helping him improve his quality of life after treatment.

“All of the doctors and team members have been informative, caring, compassionate, friendly and hard working,” Steve says. “In my opinion, these people are truly superheroes, and I would not have made it through this without their help and hard work.”

Now, the Friedmans are looking forward to spending Christmas with their family, followed by a quiet, cozy New Year’s Eve at home.

“We just spend a quiet evening at home – toast with a glass of Champagne at midnight, and then to bed,” Steve says. “Pretty boring, but it still beats being in the hospital!”

Regardless of the plans, just having Steve at home is a relief for Cindy. 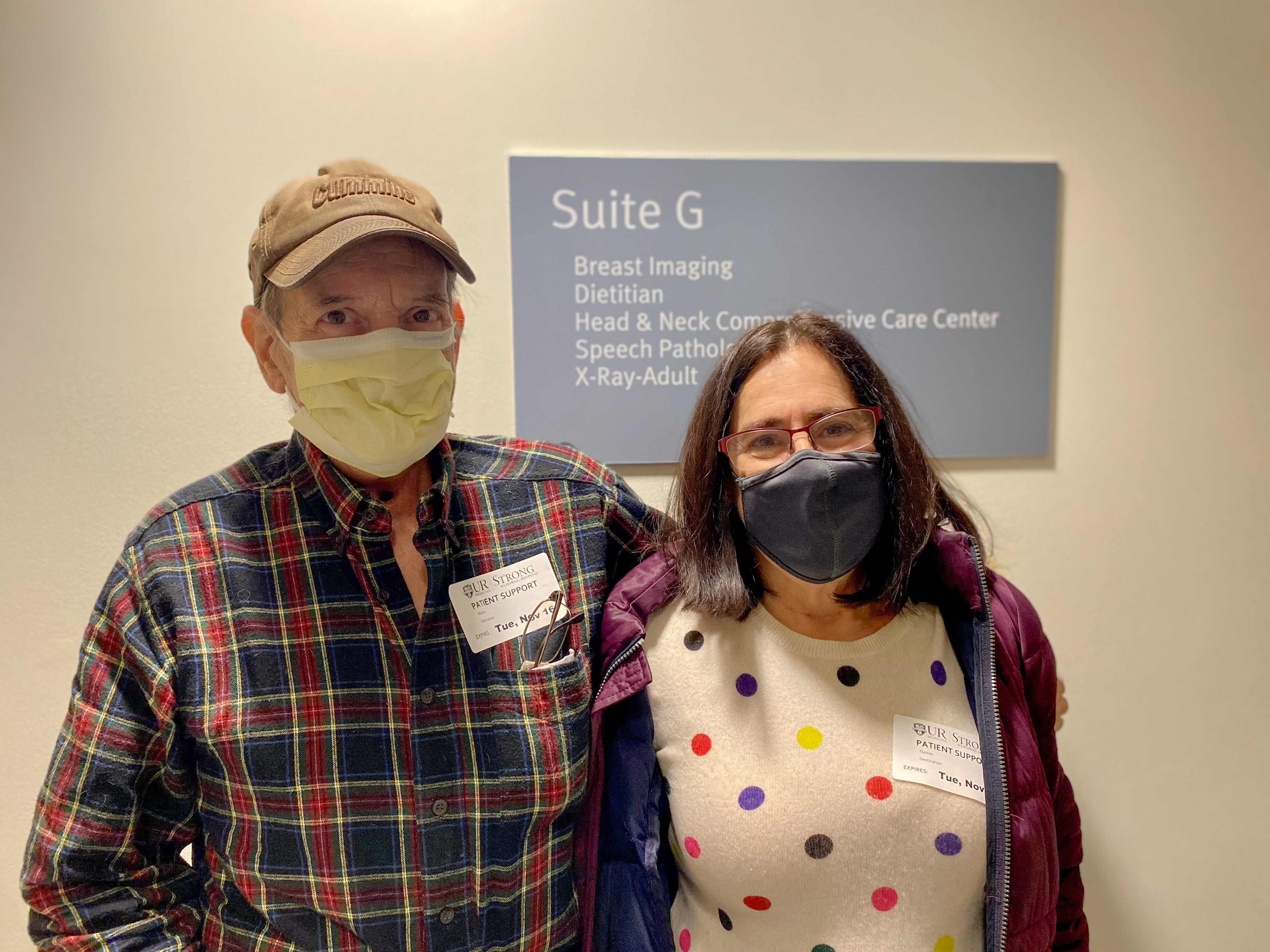 Steve says his wife Cindy has been his strongest supporter as he went through surgery and treatment for oral cancer.

“My happiest day through of all of this was when he could finally come home from the Hospital,” she says.

As he approaches one year since the day of his life-changing surgery, Steve also wants to offer wisdom and encouragement for other individuals dealing with head and neck cancers.

“Don’t push it,” he says, recalling advice from his radiation technicians. “It can take as long as two years before you feel even some semblance of ‘normalcy’ again. Take your time. You are stronger than you think.”

He also urges other patients to be proactive if they notice any symptoms that could be head and neck cancers.

“Don’t ignore any issue that you might be even slightly concerned about regarding your health and well-being,” Steve says. “If it’s not a serious issue, your health care provider will let you know. If it is a true issue, you will be glad you addressed it in a timely fashion.” 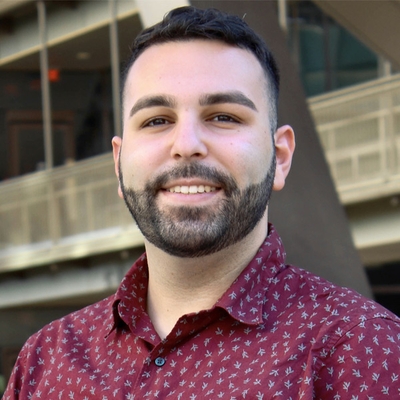 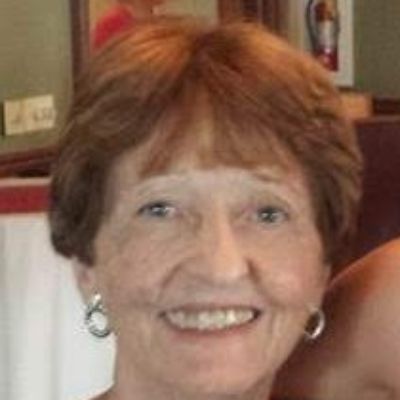 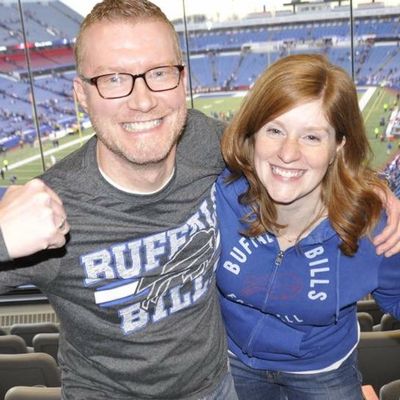 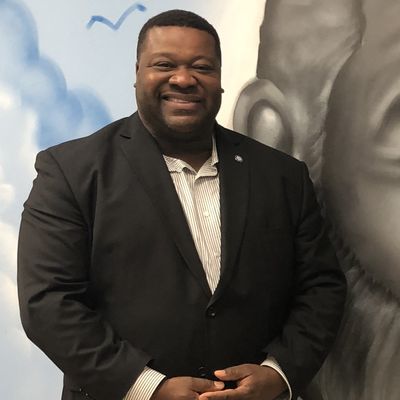 ‘We All Have That Power’: Willie Lightfoot Gets Screened for Colorectal Cancer, Encourages Others